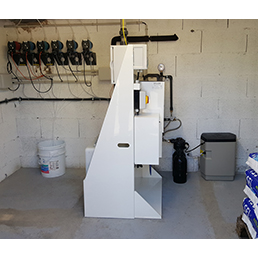 The Billère Pool was the first pool in New Aquitaine to be equipped with a chlorine generator or more commonly called salt chlorinator for the production of chlorine on site.

In order to better protect its employees when handling chlorine for water treatment, Billère’s Pool has been looking for new equipment to replace its chlorine tanks and avoid any handling of dangerous chemicals.

The salt electrolyser or in situ sodium hypochlorite generator transforms the salt contained in a brine into chlorine by the physical phenomenon of electrolysis. This makes it possible to disinfect swimming pools with chlorine in a way that is as qualitative as ever and with the following advantages:

The City of Billère has decided to work with SYCLOPE Electronics because the chlorine generator offers, in addition to the security aspect, various operating advantages:

For a year now the Billère Pool uses the chlorine generator in-situ and is very satisfied with its operation, efficiency and effectiveness.